The success of a mobile app depends on its functionality, performance, and usability. These three factors differentiate a mobile app that sells and one that does not. If you notice, majority negative review of mobile apps highlight the concerns like poor performance, compatibility issues, poor user-experience, functional defects and battery drain. And, these result in deleting mobile apps.

To launch a perfect mobile app, developers ought to emphasize on Quality and Testing. Mobile Apps are tested for usability, consistency, and functionality. App testing is crucial to check standards and ensure quality. Mobile application testing is gaining importance and a major cause of concern for developers. Professional mobile app testing services identify issues and bugs right at the beta stage of application development cycle. In a way, testing safeguards the reputation of your mobile app and strengthens its chances of succeeding and meet the business goals.

Mobile app testing is integral to providing a positive experience to the users. The mobile application testing techniques include creating a test case, user acceptance testing, and device testing. Planning the testing process determines the successful release of the mobile app. The mobile testing strategy is determined by the app’s functionality, industry needs and nature of the app- native or hybrid. The testing strategy should ensure that the mobile app meets the performance and quality standards. Few important strategies for mobile testing are:

1. Select the device – Choose wisely the devices for testing based on market analysis. While deciding the device for testing, both the app builder and clients must consider the marketing need, popularity of devices, memory size, and connectivity. Three important factors to consider are versions of operating system, compatibility factor, and screen resolution.

2. Use of Emulators – With mobile devices ranging from tens to thousands, testing internal configurations have to be taken into consideration. Testing on different devices is both difficult and time-consuming. Testers use emulators to mimic the mobile devices in the similar virtual environment to improve efficiency, save time and reduce expenses. Emulators are effective in testing the functionality of mobile applications. Different types of emulators for mobile app testing are- device emulator, operating system emulator and browser emulator . Choice of an emulator should depend on the network options and instrumentation required for the mobile application. However, use of emulators does not put an end to the use of physical devices, as the latter is essential to understand application behavior in real-time.

4. Cloud Testing – It is testing the mobile application on multiple networks, systems through the internet so that it can be managed and updated. In cloud testing, a web-based testing environment is created which provides access to remote devices in real time. It is cost-effective and easy-to-use use. Cloud computing fetches backup of data from a remote location which makes restoring and recovery of data easy.

5. Manual vs Automation Testing – Manual testing is the most common testing approach that ensures functionality of an application and its features. Automated testing helps in identifying issues of the mobile app fast. In automated testing, pre-scripted tests are executed before the app is released to production. Mobile app testing automation tools are of two types- image based like Sikuli, RoutineBot, EggPlant and object based like Ranorex, Jamo solution . Testers should use advanced Android mobile application testing tools like Robotium Android Testing Tool, Appium, MonkeyRunner, Selendroid and UI Automator . Few iOS mobile application testing tools are XCTest, UIAutomation, Frank, KIF and iOS Driver to name a few.

A sound mobile testing strategy determines the success of the app. The state-of-the-art testing facilities coupled with a sound strategy ensure better quality mobile apps and quickens the time-to-market. 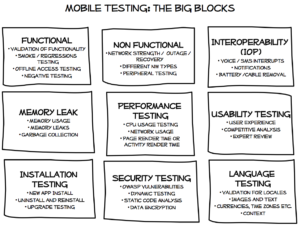 A study states that 50 percent users who encounter any bug or issue with the mobile app will never return. There are various checklists that a tester has to keep in mind to ensure a bug-free mobile application. The best mobile app testing services follow the best practices to minimize the chances of any bug. Following the below-mentioned best practices will ensure a versatile mobile app.

1. Test plan – Plan the testing schedule right from the onset of the development process. Testing should be conducted at every stage of development so that the issues can be identified at the earliest. Have a testing strategy as it brings uniformity and ensures a cost-effective process.

2. Defining the Scope – It is important to define the scope of testing properly. Since the mobile app ecosystem varies widely it might be impossible to consider every operating system, carrier, device model, and configuration. So while defining the scope reduce the options to a supportable scope.

3. Test both Service and Client Side– Testing should be done on both service and client-side as it helps to assess the load that the app can handle.

4. Automate Testing – Automation at different stages of testing reduces the time-to-market and increases the return on the investment. Testing frameworks, IDEs, and in-house scripts should be created to detect design issues and other faults. However, it is important to periodically maintain the automation test suite.

5. Battery Testing – Apps that consume more battery are deleted by the users. Battery backup is an important determinant that users consider while installing any app.

6. Testing tactics at par with Development Process – Performance, security and stress testing are integral to a robust app. Implement agile methodologies for testing to shorten the gaps between testing, bug fixing and release of new functionalities. This improves efficiency and team cohesion. Also, identify the vulnerabilities resulting from the use of open-source and third-party software packages.

7. Ensure global appeal – A mobile app should have global appeal, that is, it should support different currencies, languages and localized version of regional social media networks. Test that the app supports different environments to enforce international appeal.

Testers should embrace these best practices to ensure an efficient and effective mobile app testing services. These techniques improve the usability of mobile apps. The aim is to develop mobile apps that people will enjoy and help in making the life of users easy.

Mobile app testing services are in demand now like never before. Businesses across different domains test their mobile apps to make it a success. Depending on the requirement, different testing types are performed. Different types of mobile testing are: 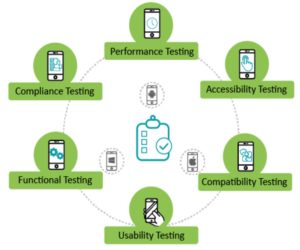 Functional Testing – Functional Testing ensures that the mobile app is working as expected. Usually, it is performed on the user interface to test user interaction and transactions. Various factors relevant to this form of testing are- mobile application types based on business functionality, type of target audience and application distribution channel. Functional testing requires human consideration, it is an exhaustive, complex and time-consuming process. So it is wise to opt for automated testing. Experienced testers use different automated mobile application testing tools. However, for effective functional testing results, testers can combine manual testing with an automated process.

Performance Testing – The fundamental objective of this form of testing is to ensure that the mobile app performs as accepted under certain requirements. Client-side and server-side both affect the performance of an application. So, the testers have to conduct performance testing on both client-side and server-side of a mobile application. Few issues that testers take into consideration are the effects of low battery, poor bandwidth, change of internet connection, broadband connection, network coverage, transfer of heavy files and low memory on mobile app’s performance.

Usability Testing – Any good mobile app should provide an amazing user experience. The success of the app depends on its flexibility. In Usability Testing, testers assess the flexibility and usability of a mobile app. It is usually performed manually as only the humans can understand the comfort of using and different intuitive features.

Compatibility Testing – Mobile devices are of different screen sizes, versions, resolution, and hardware specifications. In compatibility testing, the mobile app is tested across different devices to assure that it works effectively as planned.

Security Testing – Aim of this testing is to ensure that the mobile app’s security and data checks are as per the requirement. Security testing assures that the app is free from any form of security threats.

Mobile applications that have undergone these testing types and methodologies ensure that the software is error-free. Developers should test the mobile app in an environment similar to the users. A mobile application testing company ensures that tests are performed across different devices and operating systems.

1. Device fragmentation, Operating Systems, Platforms – With each passing day, new and smart devices are introduced and along with it updated operating systems are launched. This makes mobile app testing complicated, testers need to understand the different nuances- permutation and combinations to ensure seamless functions of mobile apps as the users desire. Device fragmentation is a major challenge for app testers, especially for Android OS. It has been observed that iOS users upgrade fast to the latest version of the OS whereas Android users are relatively slow in upgrading to the latest version of OS. So, the testers have to test for different versions of Operating Systems.

2. Physical characteristics of Mobile Devices – Mobile app architecture has three approaches- native, hybrid and Web/HTML5. For each type of mobile app test case scenario for performance, compatibility and conformance testing also differ. Both Hybrid and Web apps require both on and off platform test cases, whereas Native apps have reduced the scope of testing. Test the Web-only apps rigorously for different versions of the browser. Test Hybrid and Native apps for successful updates, platform interaction, execution and download.

3. Performance and Security – Personal data is stored across different devices and apps. It is needless to say that security and performance testing is an important ingredient of QA arsenal and should be given a serious consideration. To ensure data privacy, it is mandatory to conduct the possible test methodologies.

4. Network Diversity – The performance of a network impacts the user experience of a mobile app. For testing scenarios, this must be taken into consideration. Network emulators aid in basic level testing but doing so in the real network is a must. The best scenario is cloud-based network services. If you are testing in a Wi-Fi network check the aspects like- how this app operated offline, the impact of Wi-Fi speed and signal strength, security considerations like encryption, buffering problem, multi-user support and resource usage.

It is always wise to identify the issues fast before the users do it.